Imagine you write and self-publish a book that is thoughtful, nuanced, provocative. Your readers rave about the content. You get so much positive feedback that you decide to enter your book in a self-published book contest. When you get feedback from the judge, you’re elated by her generous praise for the book’s content and themes. What comes next brings you back to earth: “I wanted to advance it to the next round, but I couldn’t because the interior layout was so amateurish. It looked like a self-published book.”

What does that even mean—“It looked like a self-published book”? It means the person who formatted the interior did not adhere to book design standards. When done well, book layout usually goes unnoticed. But when done poorly, it can be a potent detractor. Let’s look at some common book layout mistakes so you can avoid them.

For every text element in a book—the chapter titles, section headings, the body text—there are typographical choices. Which font to use? Which point size? Roman or italic or bold? All caps or small caps? All of these decisions affect readability and the look and feel of the book, and there are several common red flags that indicate “amateur.”

Default fonts. When you start a new Microsoft Word or Google Docs document, there is a default font in place (probably Calibri or Cambria in Word, Arial in Docs). Leaving the default font in your book may be easy, but it makes your book look like a document rather than a book.

Nonstandard or “ugly” fonts. The body text in books is traditionally set in serif fonts (those with the small strokes at the end of the larger letter strokes) for improved readability. Sans serif fonts are more commonly used for titles, headings, and captions. If you go outside the norm, have a good reason for it. And while font selection is somewhat subjective, certain fonts just do not serve you well: Times New Roman is ugly; Comic Sans is reviled; script fonts and blocky fonts are difficult to read.

Too many fonts. When you use too many fonts and font treatments (all the variations of bold, italic, and so on), the page can lack visual cohesion and can confuse readers about the hierarchy of information. Usually two fonts—a serif and sans serif with careful definition of hierarchical treatments—will suffice.

The way the words are arranged on the page can reveal a lack of knowledge regarding book layout standards. Here are some common mistakes.

Poor or missing hyphenation. When using full justification, words sometimes get spaced too far apart. Hyphenation is often the solution. But hyphenation takes some attention to, yes, hyphenation rules.

Line spacing too tight. Single-spacing your book’s body text makes for dense, difficult reading. Unless you’re publishing a mass market paperback and need to cram the words in, give your lines some breathing space. Depending on the font, spacing should be somewhere from 1.1 to 1.5 line spacing (in a design tool, maybe two to four extra points of leading over the font size). Opinions vary on the amount of white space; I like to print several spacing options and ask potential readers what feels most comfortable for their eyes.

Widows and orphans. You can’t avoid having paragraphs split across pages. When the natural break leaves a single line at the bottom or top of a page, the danglers are known as “widows and orphans.” Ideally, the formatting is adjusted to avoid these danglers. (I should acknowledge that Chicago allows for the first line of a paragraph at the bottom of the page, so you will see that from some publishers; you will not see a final line dangling at the top though.)

Wrong size margins. Authors who try to make their book appear longer tend to go overboard with margins that are too large. Probably more common though is margins that are too small. The center margin, known as “the gutter,” is particularly problematic. It often needs to be larger than the other three margins to account for the paper taken up by binding.

Headers (sometimes called “running heads”) and footers (“running feet”) are the text at the top and bottom of the page, outside the body text. The header often contains the book title, chapter title, or author name—usually with one element on the odd pages and another on the even. Page numbers can be a part of either the header or footer. When these parts of the book are not laid out properly, it is noticeable.

Mixing up even and odd pages. When you open a book, the odd pages are on the right, even on the left. When page numbering is not set up correctly, the pages get reversed. This is a giant red flag that signals an obvious oversight.

Headers and footers missing—or appearing on pages they shouldn’t. Most books benefit from having headers and/or footers (and certainly page numbers). But there are particular pages of a book where a header/footer should not be shown, such as the title page or any intentionally blank pages. Getting this stuff wrong is a red flag.

Too big, too small, or otherwise distracting. Headers, footers, and page numbers are there to provide a reference for the reader. They need to be visible but not obtrusive.

Read up, or get help

To make sure your book doesn’t get the criticism “It looks self-published,” take the time to understand book design—or hire someone who does. Avoid the common book layout mistakes we’ve discussed, and your readers—even the judgy ones—will be singing your praises.

Does Your Book Quality Match Your Brand Promise?
Book Project Support: What Do You Need?

Book recommendation: While not specific to book layout, The Non-Designer’s Design Book (4th Edition) offers solid information on typography and general design principles. (However, if you seek out my review, you’ll find I docked it a full star for poor cover design.)

To get a better idea what to expect from our newsletter, visit the Subscribe page.

Looking for a speaker? Give me a call. 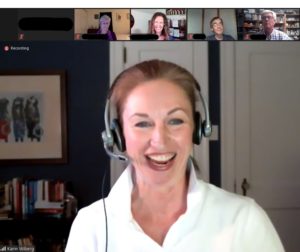 “Karin’s approach is dynamic and thoughtful. She knows how to work with clients to identify and hone their message, how to help them draw conceptual gold to the surface and craft it into a beautifully structured book. She knows when to zoom in and support, when to pull back and let the client process, when to listen and when to talk. The results are collaborative and nothing short of amazing.” —Rita Lewis, independent writer and editor

“Karin has an amazing talent for seeing the big picture and fitting the puzzle pieces together, while looking at the details to make sure each word does its job. She pushed and challenged me to create the best book possible.” —Becky Sansbury, speaker and consultant

“I achieved a new level of clarity in putting things together, articulating how I work with my clients, and creating consistent messaging. I feel much more comfortable and confident now in how I approach different markets.” —Bill Brown, BD Brown Communications

“Karin was the perfect solution and fit for me. She worked flexibly and closely with me throughout the editing, formatting and publishing process. ... With keen insights and gentle suggestions, Karin was able to help me transform my good book into a much better one. It was an amazing process. —A. Charles, author and coach