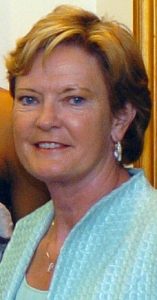 When the headlines about Pat Summitt’s impending death read “the family is preparing for the worst,” I thought to myself Really? Death is not anywhere close to the worst thing about Alzheimer’s.

The worst is the gradual disintegration of self. The gradual loss of language, of expression, of history, of relationships. The crumbling of the brain until one forgets how to function, until one literally forgets how to live. If anything, death comes as a relief.

Pat Summitt was diagnosed with early-onset Alzheimer’s at age 59, and died at 64. My father was diagnosed in his mid-50s and didn’t die until he was 73. I imagine if Summitt’s siblings and son are anything like me, they share some of my apprehension about the genetic component of Alzheimer’s disease. What if…

Recently I had lunch with a friend who I hadn’t seen for quite a while. I was delighted to learn that she was nearing completion of her novel, which had been started years ago, then set aside in the busyness of life. “Before we go,” I said, “I have to ask: What triggered you to pick up your book again and make such great, steady progress?”

It was no surprise to hear it was related to her sister, who, within a shockingly short time, had been diagnosed with brain cancer, begun treatment, and died. “I never considered the possibility that I wouldn’t be able to express myself. She handled it with such grace. You never know what will happen. Now I have to write—if nothing else, I have to write for her.”

I never considered the possibility that I wouldn’t be able to express myself.

Pat Summitt lived a marvelously engaged life. She committed herself to excellence and the full development of young athletes. By all accounts she was well loved. She took the opportunity for expression while she had the chance, not knowing that her brain would be clobbered at such a young age.

I’m not sure my father took that opportunity. As a result, I try to make sure I do, but some days I worry that I am not expressing myself as fully as I need to.

What if our “What ifs” could inspire us to take action while we can?