Fly Me to the Moon: Reigniting Inspiration 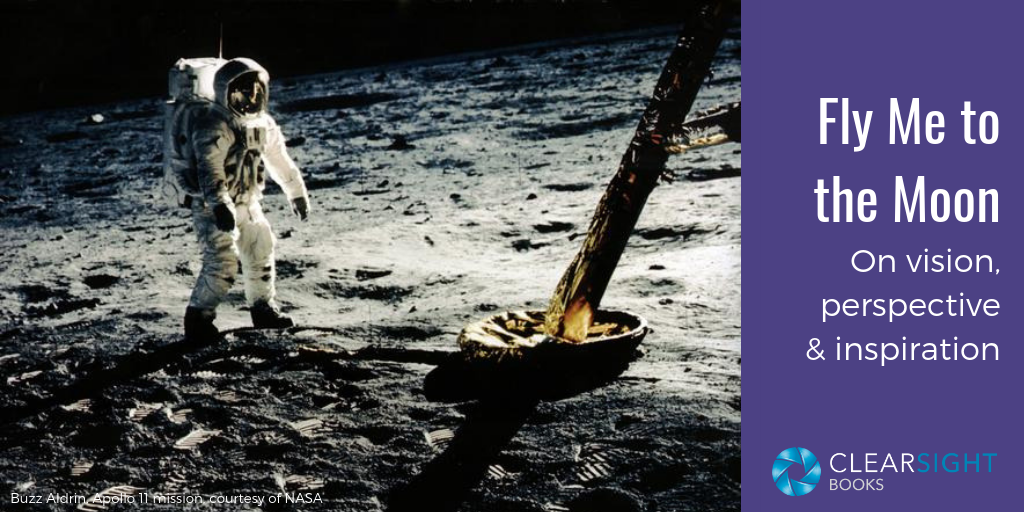 A few months ago my husband and I watched the National Geographic series Mars.

It’s an odd mash-up of sci-fi and documentary: the story of a future crew that explores and settles Mars is punctuated with present-day experts and enthusiasts discussing space exploration. At the end of the series, one person laments that we are about to reach the 50th anniversary of the Apollo 11 moon landing and have not yet attempted a crewed mission to Mars or anything as BIG as that one giant leap.

When I heard that comment, I had an eerie sense that I’d watched the moon landing as a child—a vague memory of a grainy black-and-white TV with staticky sound. I was only 18 months old at the time. Could it be possible? I texted my mother to ask. “We did watch the moon landing and you could have remembered it!”

I hereby claim my first memory—the Apollo 11 moon landing. On July 20, 1969, Neil Armstrong and Buzz Aldrin stepped on the moon while Michael Collins piloted the command module in lunar orbit.

That’s one small step for [a] man, one giant leap for mankind. —Neil Armstrong

This past weekend was the 50th anniversary of that event. It felt like a holiday for me. In addition to swinging by the North Carolina Museum of History for their celebration, my husband and I went to the IMAX theater to see the documentary Apollo 11. (You can find the film on streaming services, but I highly recommend a big-screen setting.)

The sheer magnitude of the effort, the enormity of the ship, the technical complexity in a world of slide rules—not to mention the film’s new footage and exceptional soundtrack—left us awed. Several times during the movie, I literally had to shut my mouth because my jaw kept dropping. How did we ever achieve something so magnificent? (And why does it feel so impossible today?)

The feelings came fast and strong: bubbling giddiness . . . despair at personally achieving anything of note . . . exhilaration at all the possibilities of the universe. I’ve been struggling for several days to articulate what I took away from the film and the landing itself. I think it’s this:

We need vision. It might seem an overused example, but this anniversary hammered home how well JFK painted that compelling picture of sending a man to the moon and getting him back safe again. Even if our desire is unconscious, we long for a clear vision. It needn’t be on the grand scale of space travel, but when a pursuit feels worthy, it pulls us forward, even to the point of transcending what we thought possible.

We need perspective. Going to the moon offered us a new view of Earth: this spinning marble is both stunning and toy-like. When we can put our life and its events into a broader context, it changes how we view them, their magnitude, their importance, their risk. (In the face of space travel, some of my anxieties seem downright silly!)

We need inspiration. Who among us has not felt small and undeserving, discouraged and low? Inspiration pulls us out of those troughs. Observing a collaborative force of intelligence execute the impossible, watching our fellow humans walk on a surface that once seemed forever distant . . .  Well, how does one begin to describe the feelings evoked? Motivated, encouraged, energized? Those words seem so insipid—and yet they’re true. We can (and should) seek out inspiration in many places, and once in a while, if we’re lucky, we find a touchstone like the moon landing.

Fifty years from now when they make a documentary of your life, what’s it going to show?

When you’re doing the scary work, sometimes you need a hand to hold. If your scary work involves writing a book, I can help. Get in touch at karin@clearsightbooks.com or 919.609.2817.

Bonus: If you’re in the mood for some space travel, check out Mary Robinette Kowal’s Bradbury-esque short story, The Lady Astronaut of Mars. And if you like that, I highly recommend her novel The Calculating Stars.